[Tokyo Tower v Tokyo Sky Tree] Thoroughly compare the old and new towers! Which is a true Japanese symbol! What? 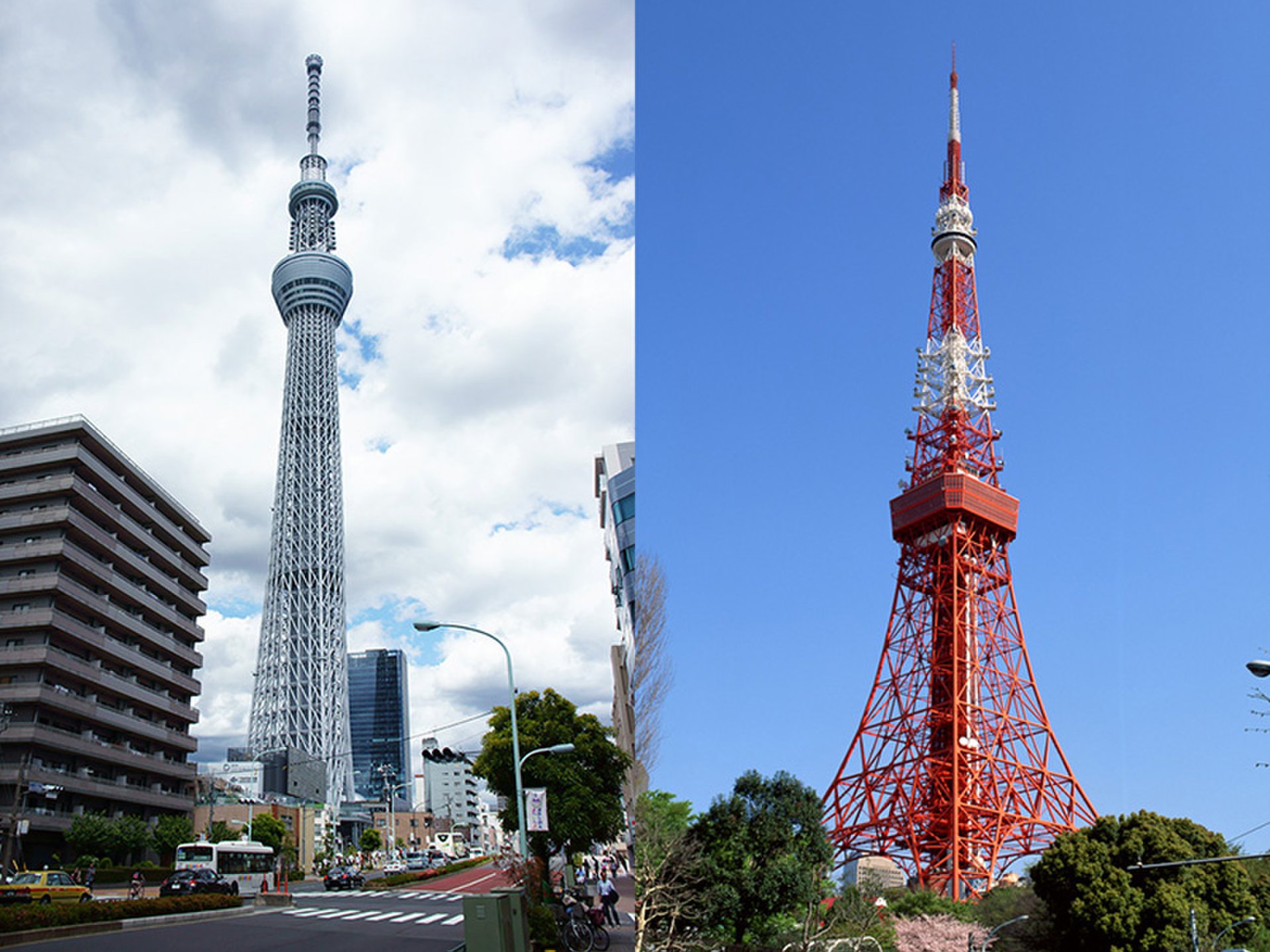 "Tokyo Tower" which has been a symbol of Japan for about 50 years since its opening. And the beginning of the new era is felt, Japan's new symbol "Tokyo Sky Tree". Let's thoroughly compare the two major sightseeing spots representative of Japan and decide the true symbol of Japan! Which do you like?

The situation is changing daily due to the new coronavirus, so please check the website of each facility for the latest information.
Also, please refrain from unnecessary and urgent outings in areas where self-restraint is requested.
In order to prevent infectious diseases and prevent their spread, we recommend that you take care of cough etiquette, hand washing, alcohol disinfection, and wearing a mask.
table of contents
Introduction - What is Tokyo Tower and Tokyo Sky Tree? ~
The view from the observation deck where you are interested! What?
Light up confrontation!
Tokyo Tower Aquarium vs Sumida Aquarium!
[Extra edition] Shinto shrine confrontation at the foot of each tower!
A landscape confrontation with a tower!
Both towers are attractive!
See more

Introduction - What is Tokyo Tower and Tokyo Sky Tree? ~

Tokyo Tower is a comprehensive radio tower located in Shibakoen, Minato-ku, Tokyo, the official name of which is the Japanese radio tower. It was completed on 23rd December 1958 and the height was 333 meters. It is the second largest building in Japan as well as a sky tree as a freestanding steel tower and is known as a symbol and sightseeing spot in Tokyo.

Tokyo Sky Tree & Apenha Haruka! ! Of East and West extraordinary from the peak extraordinary of the night view bullet Petit travel to enjoy!

Tokyo Sky Tree is a radio tower located at Oshima 1-chome Sumida-ku, Tokyo. It was completed on February 29th 2012 and the height is 634 meters. Known as the tallest tower in the world, it is the second largest building in the world after the Burj Khalifa in Dubai as a population building.

I want to prepare a special cake!

Why don't you prepare a print cake with photos printed on it? The cake with your friend's photo printed on it will surely be memorable ♡ At a shop where you can bring in with this cake!

The view from the observation deck where you are interested! What?

The color of the light also changes according to the season, lighting up the high-pressure sodium lamp of warm color in spring / fall / winter, lighting of a cool white metal lamp lamp in the summer . Also, from 20 o'clock to 22 o'clock, a special light up called diamond veil will be made.
Light down is at 0 o'clock, "It is said that a couple who gazed at the moment the light-up of Tokyo Tower disappears can get eternal happiness ..."!

[ night view date in Asakusa's Sky Tree ♪] Confession is also successful with the scenery from the top floor! What?

The light of lighting that shines through the tower with light blue light with the motif of Sumidagawa's water as a motif, "chic" with the theme color of Edo purple, lighting with a sparkling light that balances well with kinkaku Two lightings of "Ya" are alternately taken every day. Also, exclusive time writing is done.

Tokyo Tower Aquarium is an aquarium that collects beautiful fish and rare fish all over the world and classifies and displays approximately 900 kinds of ornamental fish by habitat. Different BGMs are flowing in each corner, and you can enjoy the difference of fish by region with music.

【Aquarium Dating】 A wonderful night at Sumida Aquarium near the Sky Tree.

【Aquarium Dating】 A wonderful night at Sumida Aquarium near the Sky Tree.

The Sumida Aquarium is the first facility in the Kanto region to realize complete artificial seawaterization of water in aquarium by artificial seawater production system. In the domestic largest indoor open-air tank, you can see penguins and fur seals up close, and you can also see the breeding site in the back yard.

Sumida Aquarium is from the red button belowReservationI can do it.
Sumida Aquarium
Location: 1-1-2-2, Sumida-ku, Tokyo, Tokyo Solamachi 5F
Access: 132 m from Sky Tree station
Opening hours: 9:00 to 21:00 on Sunday
Save money by booking online!

[Winter 2020] 40 dating spots in Tokyo! standard to hot spot!
Those who are in trouble "Where do you go on a date in Tokyo?" We have collected recommended spots that can be used in various scenes from standard to open hot spot , from indoors to outdoors. I think that it will surely be exciting if going with a couple ! By all means Dating plan of reference please try to.
DateTokyo

Tokyo playgrounds! 30 recommended spots that you won't regret
Where shall we play with friends .... So for those who are worried, we will introduce 30 recommended playground spots in Tokyo ♪ The playlife editorial department carefully selected spots popular in Tokyo such as movies, aquariums, pubs, shops and parks. With this, you also have no trouble placing to play in Tokyo!
WalkTokyo

relaxing must-see for a couple who want to sleep! A selection of 12 dating spots in Tokyo that can be leisurely
のんびりしたいけど、恋人と一緒にゴロゴロしたい。どのカップルにもそんな悩みがあると思います。たまには"のんびりデート"を企画してみてはいかがでしょうか。外でもイチャイチャゆったりしたいカップルにおすすめの東京都内とその周辺で行けるデートスポット特集です！
DateTokyo

[By area] The definitive edition of Tokyo Lunch! 31 popular recommended Gourmets
Tokyo, the capital of Japan, is full of delicious gourmet shops! Because of your worries and "Do Where do you try for lunch today?", Tokyo recommended has put together a lunch shop 31 Miseerabi, to another area. Tokyo lunch through if you read this!? Your daytime of reference but please to.
Lunch and gourmetTokyo

There are also cake free shops: 11 select lunch shops that can be surprised in Tokyo
今すぐ予約可能！誕生日と言えばサプライズ。大切な人を喜ばせたいけれど、可愛いプレートがあるお店探しに一苦労。 そこで今回は、ランチタイムに素敵なバースデープレートを出してくれるお店をご紹介！もちろん、ディナーで使えるお店もあるので要チェックです。
SurpriseTokyo

Birthday celebration at lunch in Tokyo! 6 recommended Spots ♪ Surprise Birthday Plate
night is busy people and at work, daytime mom who does not meet only between, put out the money you were lunch student 's must-see! Your shop that can celebrate your birthday lunch time introduce you to! There are plenty of shops in Tokyo where you can have a birthday surprise even at lunch. ◎ Also, this time we carefully selected shops in places that are easy to gather in Tokyo. After a delicious meal, an inspiring birthday plate will be presented ... Wouldn't your opponent celebrate from daytime? !
SurpriseTokyo

anniversary dinner date full version in Tokyo! 15 recommended restaurants where she delights
With an important lover anniversary It is difficult to prepare gifts and restaurant reservations. Where should I give presents even if I prepare them? If you do n’t have much experience, stylish It is good to give at a nice restaurant. This time, we carefully selected a restaurant in Tokyo that will surprise you. Anyone who wants to please her reference Please do it ♪
SurpriseTokyo

Present for parents at first salary! recommended ranking TOP 3 ♡
Everyone of the new members of the society, do not you give your parents and grandparents who are indebted to you with the first salary? I was also present in the starting salary, because it was very pleased, by all means ^^ ♡ I take this opportunity to recommended a gift that, together with the shops located in the Tokyo metropolitan area introduce you!
SurpriseTokyo